In this case, I was browsing the Internet for better antenna options and kept running across articles expounding the virtues of the “Hexbeam Antenna” and thinking, “Yeah, I could do that” so off I went.

Like many others, I thought I might be able to get by with materials laying about the house or readily available in my small town stores. After trying numerous versions of PVC pipe and fiberglass rods, I wisely decided that the fiberglass tubes suggested would be the better options. So swallowing the little bit of pride available, I ordered the kit of tubing (plus an extra piece of 3/4” , more on that later).

Whilst waiting for the tubing to arrive I set out to collect whatever else I could locate about the house. The aluminum plate was the first treasure found. It was just a piece of 5mm painted aluminum that fortunately seemed to good to turn in for scrap in the past. It took about an hour with the bandsaw and hand drill to convert my former scrap aluminum to a nice, 6-sided, base plate. I drilled the holes for the U-bolts since I had also found a box of nice stainless ones that had been ordered from China via Ebay for another antenna project. The center hub was still a missing piece so that was left blank.

I thought that I had plenty of stainless hose clamps, but a quick inventory revealed that while I did have a bunch, the hexbeam was going to require many more. OK, fine. But going to the local hardware was going to quickly burn through the budget...so back to Ebay. Lucky me, I found a US vendor selling quantities of 20 all-stainless clamps for two bits each. That works.

Still no hubs, but while I was on an XYL errand in my rural village I wandered into the local pool supply store. I don’t have a pool but it was close to the farm supply where I was sent to procure dog food. As I was leaving, I spotted an old pool ladder behind the store. Can’t resist a closer look... yeah, I like junk. The little aluminum feet at the bottom of the ladder might just make the sought after hubs. $5 made me and the pool guy both happy. I got them both, thinking that one top and one bottom of the antenna base plate might be a good idea.

My table saw (a makeshift work surface) was now covered with a small pile of potential hexbeam antenna components. One lucky find was a spool of really nice black Dyneema rope. The stuff is ridiculously strong and UV resistant. There were also a few spools of 14AWG THNN wire in various colors. I had in mind that I would use some epoxy glue at some point so I set out to locate what I might have, and to see what sort of spray paint I might have that would still come out of the can. 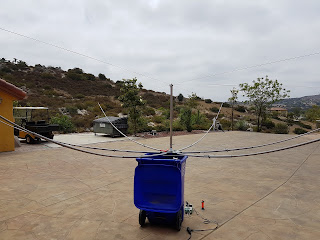 In the middle of the search, the UPS truck pulls up the driveway with the precious fiberglass tube kit. Nothing to do now but get to work.

The hose clamps haven’t arrived as yet so I thought I would try out my original plan A. That is, rather than slitting and clamping the sections of tubing together, I would mix a bit of epoxy and glue each joint. The found epoxy was the fast setting JB weld. It is easy to use and plenty strong. I built one arm complete to evaluate the process. Satisfied, I assembled the two smaller tubes of each arm and after they cured for 20min, added the 1” tube. Lastly, I cut the extra piece of 3/4” into 6 equal pieces and glued them flush into the open end of the 1” end of each of the arms. The thinking here is to make the ends a bit stronger to resist being crushed by the U-bolts.

The next morning there was nothing to do but to assemble the beast. I tried working on the ground but my back was having no part of that. A recycle bin was the only work table in sight, so be it.

The arms went on the base in minutes producing a satisfyingly large representation of my efforts so far. “Hmmm, what should be the next step” and: “Oh S**t”, the center post! I had thought about it but somehow neglected to build it. Narrowly avoiding another trip the the local hardware store, an hour of searching produced the 1” square aluminum extrusion that I had briefly envisioned for the post. 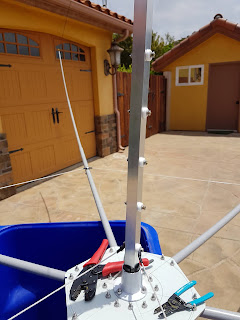 There are thankfully good instructions on various websites that suggest ways to build a center post. I drilled holes at the suggested locations and fabricated 6 sets of PTFE shoulder washers. I wanted a copper center conductor but all I could dig up was a bit of bare 12awg wire. Guess that will work… so I laid the post on the bench (tablesaw), stuck the shoulder washers in the outside, and poked in some #8 brass bolts. It took a little blue tape to hold everything in place. The copper wire then soldered fairly nicely in the slotted heads of the brass bolts. It took a bit of fiddling to get the ground bolts in place but the big holes for the shoulder washers made it possible. It was surprisingly easy to then shove the wire/bolt assembly down the end of the tube and pull the bolts through the holes. Installing the SO-239 connector on the side of the top was a bit more of an effort but having done that I covered the open top with a bit of scrap aluminum and some silicone.

Finally, now back to the assembly. The post was a bit small for the pool ladder flange, but wrapping it in a bit of scrap aluminum solved that little issue and it tightened up nicely with the flange set screw.

I cut 6 eleven foot (plus about 2”) pieces of the wonderful Dyneema line and crimped/epoxied ring lugs on one end and made loops on the other. Using a flame to cut the line left a nice little ball on the end that further strengthened the crimp connection. The loops were also made with crimps of copper tubing and a bit of epoxy. And all joints covered with heat shrink just to make them look nice (like anyone would ever see them). 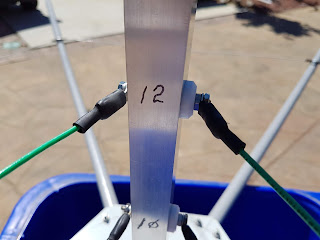 And like the above, I made another 6 eleven foot lines with loops on both ends to go between the arms.

It took maybe 20 minutes to string the whole thing together. And 10 minutes of that was searching for one of the line that was inadvertently sling shotted into the weeds when I lost my grip on the end.

Time to stand back and admire the new umbrella frame that now occupied most of my driveway. It was like a really big “cat’s cradle”. A real thing of beauty. I had a 4 foot piece of fiberglass post that was part of a military field antenna mast so I put that into service as the bottom post, primarily because it was a perfect fit to the pool ladder flange. The XYL was not so amused at this point so I busied myself with making the wire elements. 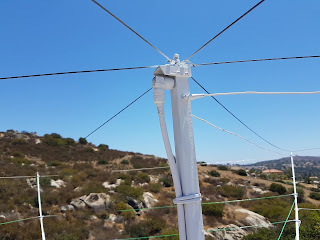 I was now practiced in using the Dyneema line so I used that as the spacer between the active elements and the reflector wires. Bending the 12 gage wire into a hook, tinning it, and then laying in the line (with a little ball on the end) in the crux of the hook was perfect. Smashing the hook tight, adding a dab of epoxy, and then covering with adhesive lined heatshrink, made for a super strong but very slim connection. 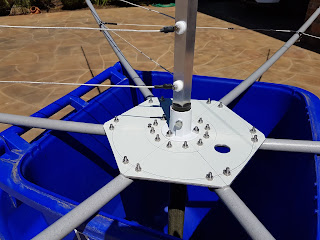 It took the rest of the day to create all six band wire antenna elements. This is probably the most time-consuming activity of the whole project. So it was the next morning before I could begin stringing the enormous spider web that was the current object of my wife’s complaints (her car was going nowhere until this thing was somewhere else).

I had tested a couple of methods for securing the wires to the arms using the suggested hose clamps, and settled upon using a bit of aluminum strap under the clamp, and about 2 inches of irrigation tubing around the wire. The 20 meter loop went on first, where I quickly discovered that it was annoyingly in the way as I worked on the rest. So the 6 meter went on next and worked outward from there. It really looks like the Internet pictures now. 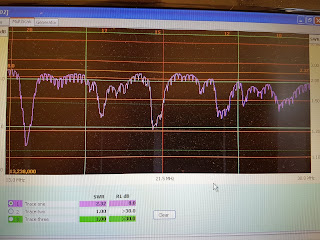 It took a few hours with my budget antenna analyzer to correct a couple of lengths and get everything tightened up. I couldn’t resist hooking up the radio and made one contact on 20m even though the antenna was still sitting at only 4 feet above ground. That done, I managed to get 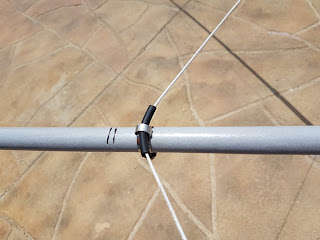 the whole thing moved from the driveway, greatly improving the odds that I would remain married.

I emptied out 4 cans of miscellaneous spray paint that I thought might prolong the life of the fiberglass and wires in the harsh California sun. To complete the antenna I constructed a quick balun consisting of a 7 turn coil of coax wound neatly inside of a piece of plastic sewer pipe.

I had a week to admire my creation and to rebuild an old Yaesu 450 rotor (another blog) before my son was able to come to the house so that we could attempt to install the giant umbrella on my homemade tower.

Getting a 22 foot diameter spider web to the top of a tower is no small task. It is not particularly heavy, something around 25 lbs, but it is difficult to find a place to grab the wiggly thing. We managed to sort of slide it up one of the tower guy wires by pulling it with a rope: my son at the t 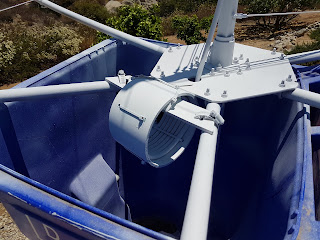 op of the tower, me at the bottom. There were a couple of iffy moments and then finally my son had it in hand and poked it home in the newly rebuilt rotor. Some clean up of the various cables on the tower and we were able to crank the tower to it’s full height of 41 feet.

Just luck I’m sure, but upon reflection, this project had far fewer mistakes and retries that just about anything I can remember doing. It is hard to say what it cost considering all of the material that was in the various junk boxes but the outlay for new stuff was under $200. As for performance, the hex pretty much lives up to the hype. I have two dipoles and a skyloop for antennas in addition to the new hexbeam. The hex is much better at rejecting local noise (from the neighbors solar panels I think) and being directional has really helped in catching the attention of some fairly distant DX stations. It also catches the attention of the neighbors but no complaints as yet. It would have been nice if it could have covered 40 meters, but that would never have made it to the top of the tower. 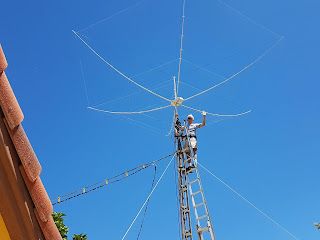 Many thanks to those whose contributions to the websites make projects like this one possible.

Posted by rob AG6YJ Nostalgia is not what it used to be at 1:32 PM No comments:

rob AG6YJ Nostalgia is not what it used to be